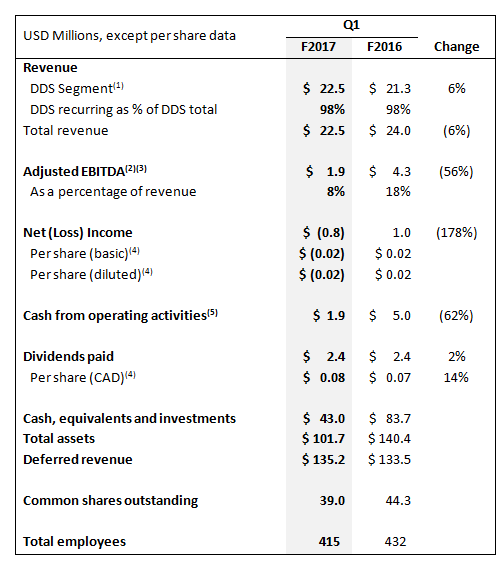 2. Throughout this document, “Adjusted EBITDA” is used as a profitability measure and “Billings” is used an indicator of future cash flows. Please refer to the “Non-IFRS Measures” and “Subscription Billings” sections of the Company’s MD&A for further discussion on these measures.

3. Adjusted EBITDA in Q1-F2016 included a $1.0 million contribution from the Absolute Manage and Absolute Service business unit. This business unit was disposed in Q2-F2016.

5. In Q1-F2017, cash from operating activities is net of $3.2 million of income tax payments and $0.8 million of reorganization-related payments. The comparable figures for Q1-F2016 were $0.9 million and $0.7 million, respectively.

“Driven by new customer wins, strong renewal rates and significant upgrades across some of our largest healthcare and education accounts, our commercial ACV base improved 2% during the quarter and revenue increased 6% year-over-year,” said Geoff Haydon, Chief Executive Officer, Absolute. “It’s clear that our value proposition is increasingly resonating with new customers and that our existing client base is willing to upgrade to access the new DDS features and capabilities we have introduced to date.”

“Our R&D investment plan is on track, enabling us to accelerate our product strategy, which in combination with our strengthened go-to-market capabilities, will further enhance our competitive position in the information security market,” continued Mr. Haydon. “We believe that the returns from these investments will be apparent over the second half of F2017 and into the next year as we pursue our growth and profitability objectives.”

Net ACV Retention(1) from existing DDS commercial customers was 100% in Q1-F2017, and was 101% in the trailing four quarter period.

ACV from New Customers(1) was $1.0 million in Q1-F2017, approximately two-thirds of which was from corporate and healthcare customers.

Adjusted Operating Expenses for Q1-F2017 were $20.6 million, which represented an increase of 5% over $19.7 million in Q1-F2016. The year-over-year increase primarily reflected increased investment in research and development headcount and contractor costs, in line with the Company’s F2017 investment plans.

The Company’s outlook for F2017 is unchanged.

The Company expects Adjusted EBITDA margins ranging from 5% to 8%, reflecting relatively stable spending across most departments and increased investment in research and development.
Investment in research and development will accelerate product innovation, as well as the migration of all product offerings to Absolute’s next-generation service platform. These investments will facilitate greater scalability and operating efficiency, support the rapid deployment of new services across Absolute’s customer base and liberate resources currently required to support two platforms.

The Company expects cash from operations, prior to payments for income taxes and reorganization charges, as a percentage of revenue to be between 8% and 12%, reflecting a double-digit year-over-year increase in Billings.

Capital expenditures are expected to be between $3.9 million and $4.4 million, with the spending largely related to upgrades and expansion of the Company’s hosted data centres, office expansion and ongoing hardware refresh cycles.

On October 20, 2016, Absolute declared a quarterly dividend of CAD$0.08 per share on the Company’s common shares. The dividend is payable in cash on November 25, 2016 to shareholders of record at the close of business on November 4, 2016.

Management’s discussion and analysis (“MD&A”) and consolidated financial statements and the notes thereto for the fiscal quarter ended September 30, 2016 can be obtained today from Absolute’s corporate website at www.absolute.com. The documents will also be available at www.sedar.com.

A live audio webcast of the conference call will be available at www.absolute.com and https://bit.ly/2ebd7Qg. Please connect at least 15 minutes prior to the conference call to ensure adequate time for any software download that may be required to join the webcast. An archived replay of the webcast will be available on the Company’s website for 90 days.

Throughout this press release, the Company refers to a number of measures which the Company believes are meaningful in the assessment of the Company’s performance. All these metrics are non-standard measures under International Financial Reporting Standards (“IFRS”), and are unlikely to be comparable to similarly titled measures reported by other companies. Readers are cautioned that the disclosure of these items is meant to add to, and not replace, the discussion of financial results or cash flows from operations as determined in accordance with IFRS. For a discussion of the purpose of these non-IFRS measures, please refer to the Company’s September 30, 2016 MD&A on SEDAR at www.SEDAR.com. 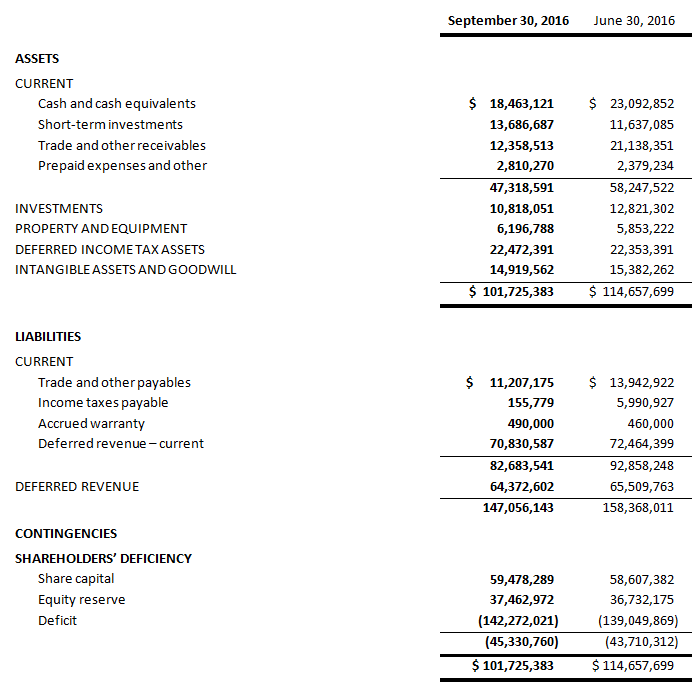 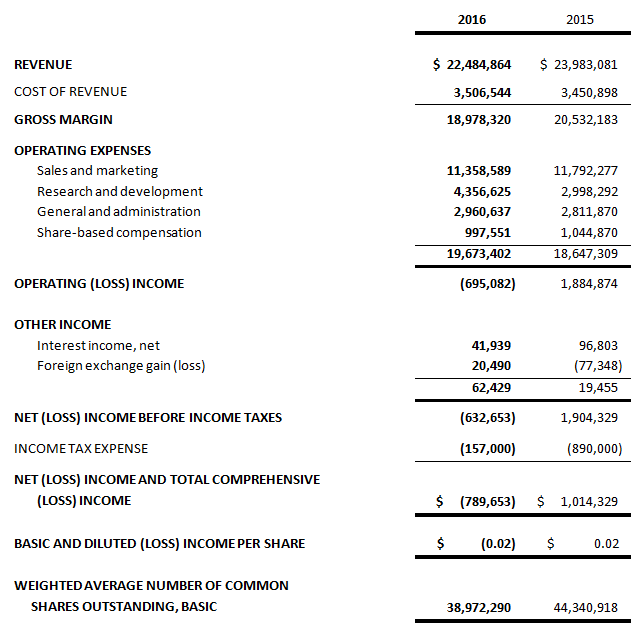 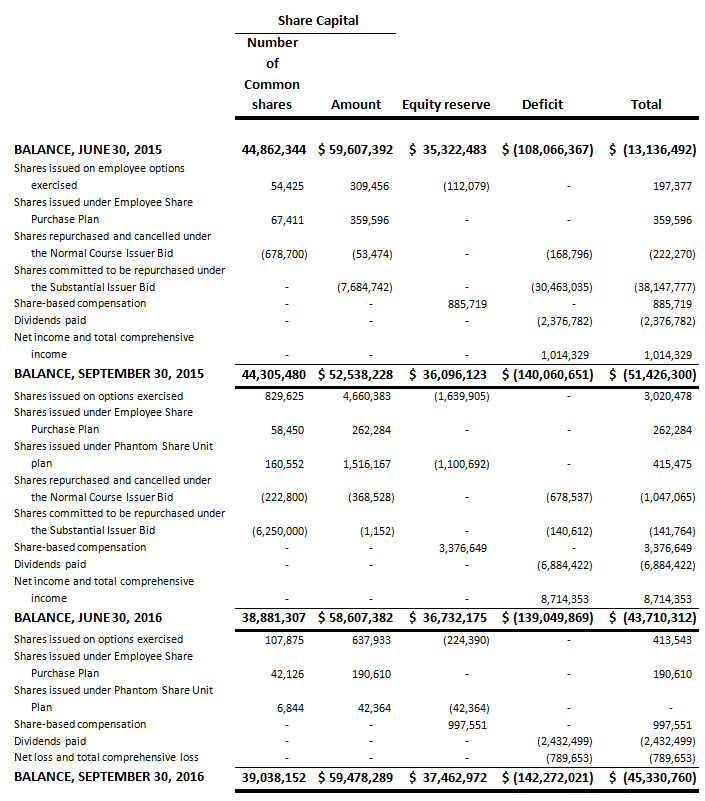 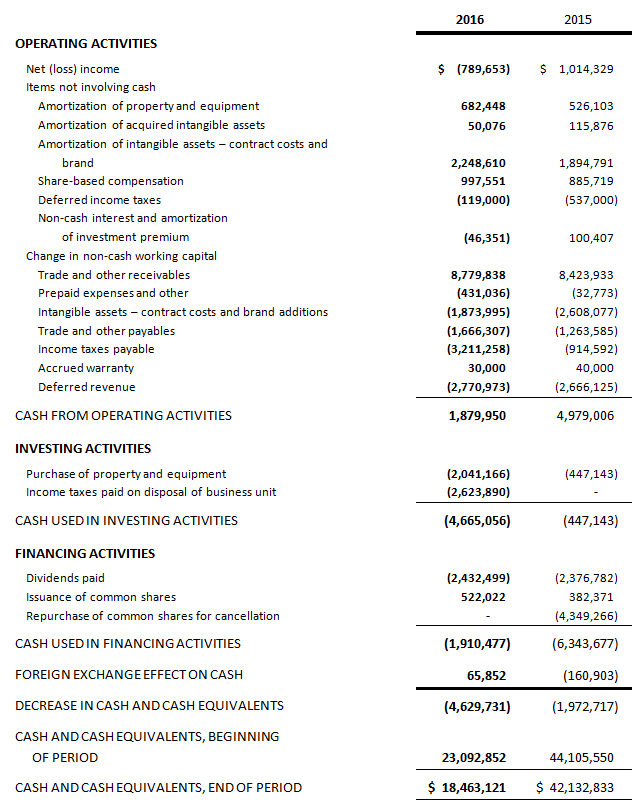