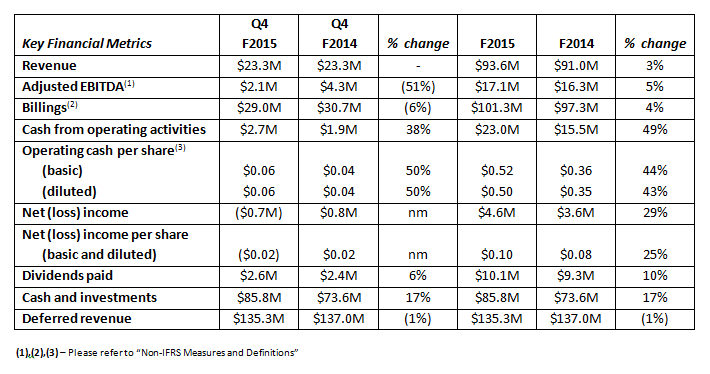 “Fiscal 2015 was an important and transformational year for Absolute," said Mr. Geoff Haydon, chief executive officer, Absolute. “Our objectives were to focus investment on products where Absolute has a unique position, improve sales productivity, increase our new customer acquisition capacity, expand our position within targeted geographic and vertical markets, and put Absolute on a path to lead one of the most exciting and lucrative segments in information technology; the security of endpoint devices and the information they contain.

"In Q4 we successfully completed the execution of several key strategic initiatives. These include the clarification of our product strategy and brand, the reorganization of our North American sales force, and the appointment of sales leadership internationally within EMEA and Asia Pacific,” added Mr. Haydon. "Despite the materiality of the changes that occurred across the business in Fiscal 2015, Absolute delivered growth in all key financial metrics.

"Our board of directors recognizes the strength of Absolute's opportunity,” continued Mr. Haydon. “As a reflection of their confidence, they have resolved to allocate CAD$50 million to repurchase Absolute common shares in Q1-F2016. Additionally, the board has indicated their intent to increase the quarterly dividend going forward from CAD$0.07 to CAD$0.08 per common share, commencing with the next quarterly dividend to be declared. The combination of our current cash and investment position, and our expectation of continued strong operating cash flows, allows us to execute these capital initiatives while still enabling our ability to invest in future growth.”

Billings of Absolute Data and Device Security (“Absolute DDS”), formerly known as Computrace, were $24.5 million in Q4-F2015, representing a decrease of 7% year-over-year and were $85.6 million for F2015, representing a 6% year-over-year increase. Billings for Endpoint Management and Service (Absolute Manage and Absolute Service) products and services were $3.6 million in Q4-F2015, which was unchanged from the prior year period. For F2015, commercial Billings for Endpoint Management and Service products and services increased 2% to $11.9 million.

Adjusted Operating Expenses for Q4-F2015 were $21.2 million, up 11% from $19.1 million in Q4-F2014, reflecting increased marketing program expenditures and an increase in employee headcount from 413 at June 30, 2014 to 444 at June 30, 2015. In the prior year period, the Company also benefited from a $0.9 million adjustment to its previously recorded investment tax credit estimates within R&D, due to the acceptance of historical claims.  For F2015, Adjusted Operating Expenses were $76.5 million, a 2% increase from $74.7 million in the same period of F2014, reflecting overall increased employee headcount, which was offset by foreign exchange savings.  Adjusted Operating Expenses represented 91% of revenue in Q4-F2015 compared to 82% in Q4-F2014 and represented 82% of revenue for F2015 compared to 82% for F2014.

Management remains confident in the market opportunity for Absolute. For F2016, the Company expects to grow its Commercial ACV base, revenue and Billings, as related to Absolute DDS. In F2016, the Company plans to expand its presence in the enterprise market, particularly in the healthcare and financial services verticals; launch new products and features, such as DDS for Healthcare and integration with third-party SIEM systems; and establish additional partnerships with leading security service providers where Absolute’s unique Persistence technology enables enhanced service and provides additional growth opportunities. The Company therefore plans to invest incrementally in research and development and sales and marketing to support this growth. Cash generated from operating activities, excluding income tax-related items, is expected to remain relatively consistent with F2015.

Management’s discussion and analysis (“MD&A”) and consolidated financial statements and the notes thereto for F2015 can be obtained today from Absolute’s corporate website at www.absolute.com. The documents will also be available at www.sedar.com.

Absolute will hold a conference call to discuss the Company’s Q4 and F2015 results on Monday, August 17, 2015 at 5:00 p.m. ET. All interested parties can join the call by dialing 647-427-7450, or 1-888-231-8191. Please dial-in 15 minutes prior to the call to secure a line. The conference call will be archived for replay until Monday, August 24, 2015 at midnight. To access the archived conference call, please dial 416-849-0833, or 1-855-859-2056 and enter the reservation code 91945987.
A live audio webcast of the conference call will be available at www.absolute.com and http://bit.ly/1MoGWFp. Please connect at least 15 minutes prior to the conference call to ensure adequate time for any software download that may be required to join the webcast. An archived replay of the webcast will be available on the Company’s website for 90 days.

Throughout this press release, we refer to a number of measures which we believe are meaningful in the assessment of the Company’s performance. All these metrics are non-standard measures under International Financial Reporting Standards (“IFRS”), and are unlikely to be comparable to similarly titled measures reported by other companies. Readers are cautioned that the disclosure of these items is meant to add to, and not replace, the discussion of financial results or cash flows from operations as determined in accordance with IFRS. For a discussion of the purpose of these non-IFRS measures, please refer to the Company’s Fiscal 2015 MD&A on SEDAR at www.SEDAR.com.

Management believes that analyzing operating results exclusive of significant non-cash items or items not controllable in the period provides a useful measure of the Company’s performance. The term Adjusted EBITDA refers to earnings before deducting interest and investment gains (losses), income taxes, amortization of acquired intangible assets and property and equipment, foreign exchange gain or loss, share-based compensation, and restructuring charges and post-retirement benefits. The items excluded in the determination of Adjusted EBITDA are share-based compensation, amortization of acquired intangibles, amortization of property and equipment, and restructuring charges and certain post-retirement benefits.

See the “Subscription Business Model” section of the MD&A for a detailed discussion of why the Company believes Billings (formerly referred to as “Sales Contracts”) provide a meaningful performance metric. Billings are included in deferred revenue (see Note 10 of the Notes to the Consolidated Financial Statements), and result from invoiced sales of our products and services.

3) Basic and diluted Cash from Operating Activities per share

A number of significant non-cash or non-recurring expenses are reported in our Cost of Revenue and Operating Expenses. Management believes that analyzing these expenses exclusive of these non-cash or non-recurring items provides a useful measure of the cash invested in the operations of its business. The items excluded in the determination of Adjusted Operating Expenses are share-based compensation, amortization of acquired intangible assets, amortization of property and equipment, and restructuring charges and certain post-retirement benefits. For a description of the reasons these items are adjusted, please refer to the Fiscal 2015 MD&A. 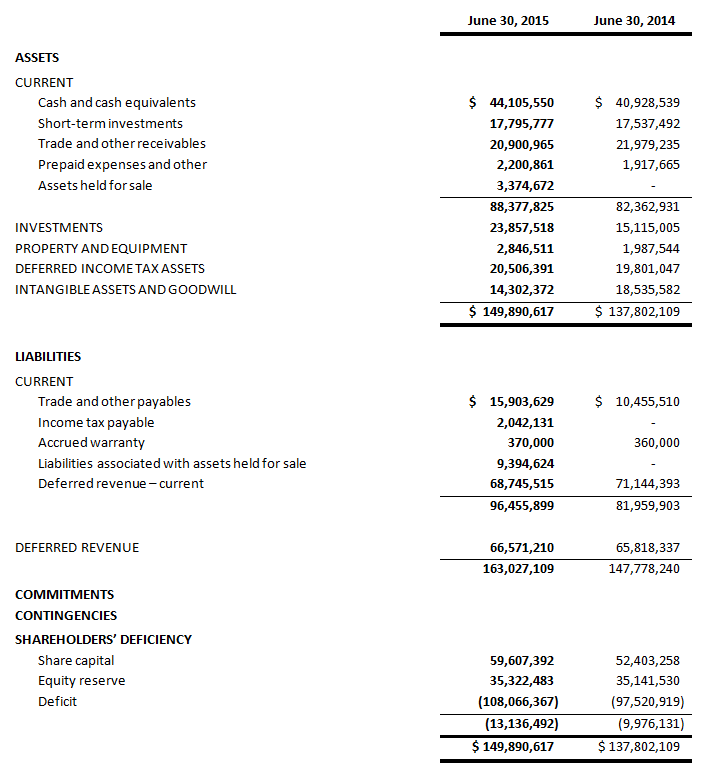 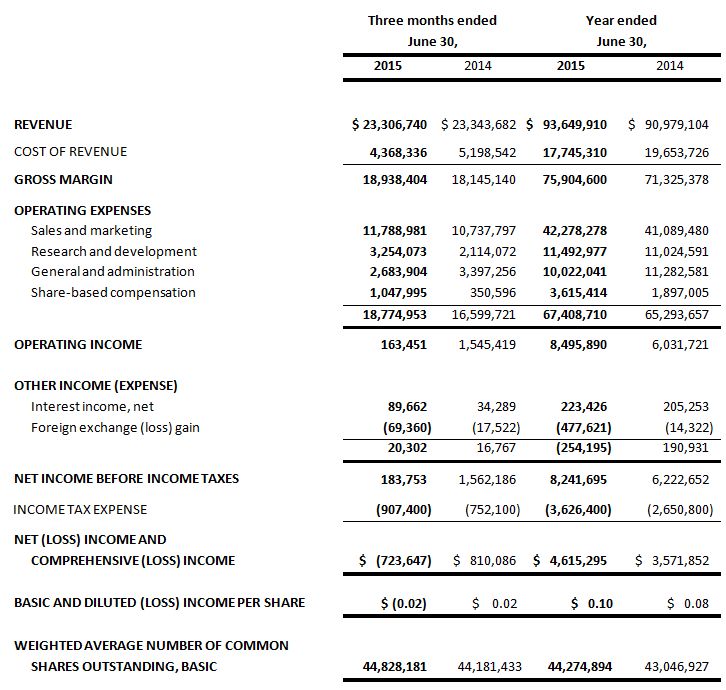 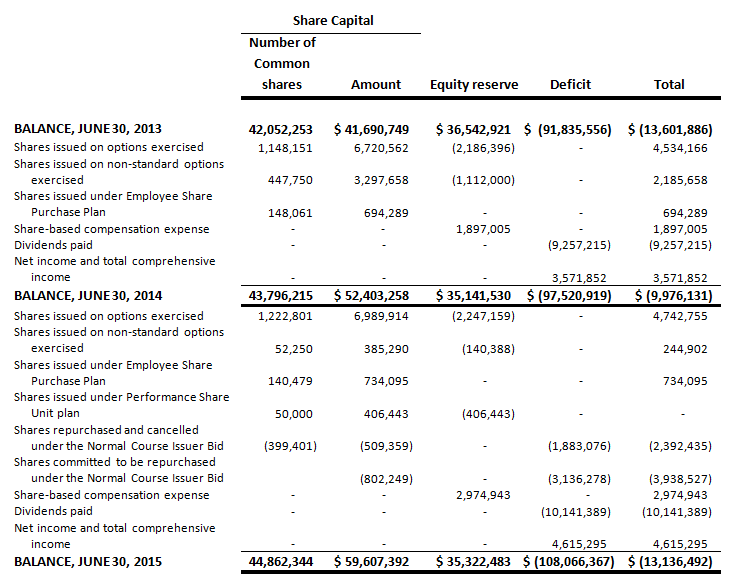 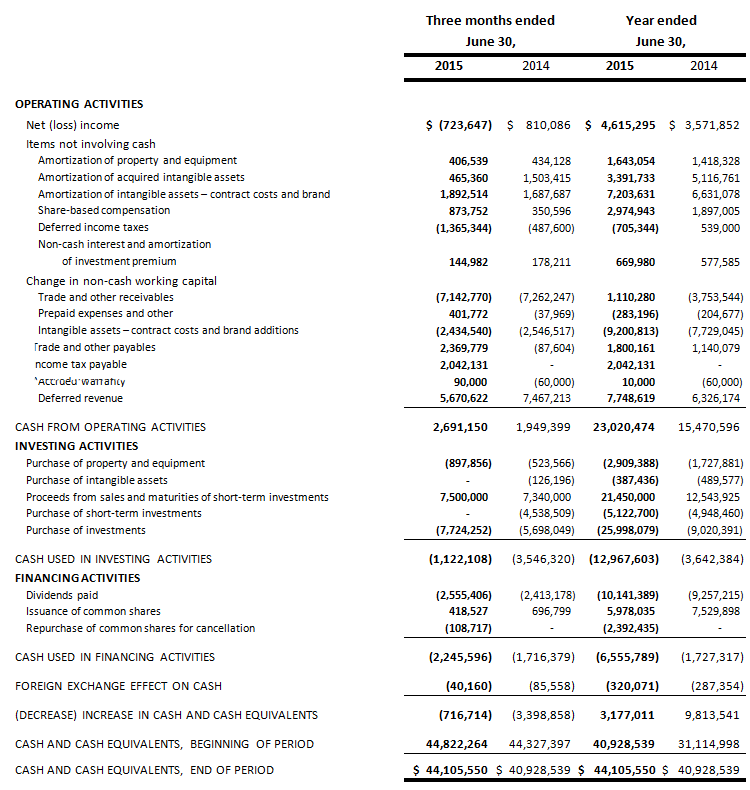