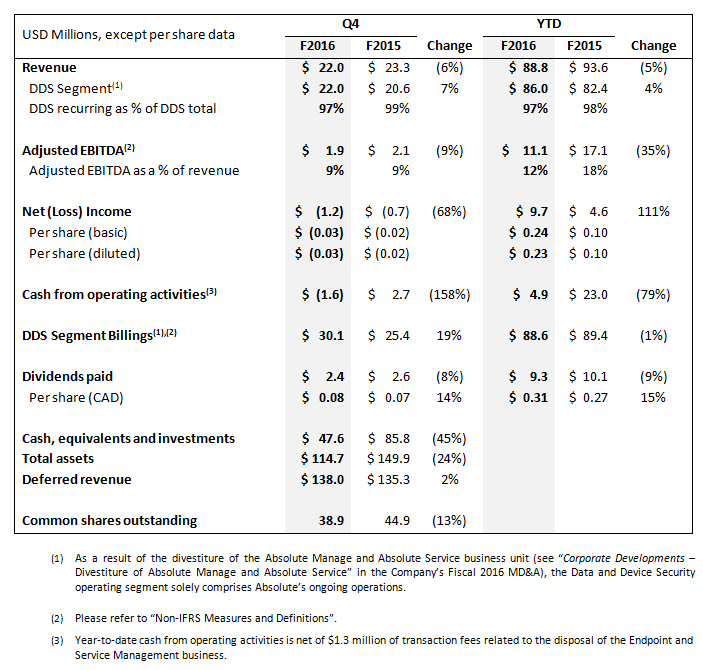 “Fiscal 2016 was a breakthrough year for Absolute. Revenue and customer growth were propelled by aggressive product innovation, new go-to-market initiatives, and growing market demand from organizations seeking to protect critical data from external and insider threats,” stated Mr. Geoff Haydon, Chief Executive Officer, Absolute. “We finished Q4 strongly, reflected by a 7% increase in revenue and a 19% increase in billings, as larger enterprises took advantage of our innovative and entirely unique endpoint security and data risk management solutions. In fiscal 2017, we will continue to drive towards our long term objective of 20% revenue growth and 20% Adjusted EBITDA margins. This will involve accelerating investment in R&D, elevating the productivity of our global field investments, and expanding enterprise and third party ISV adoption of our Absolute Persistence-enabled endpoint security solutions.”

Based on its success of delivering targeted product enhancements that directly contributed to sales results in F2016, the Company intends to expand its research and development capabilities to accelerate delivery of new DDS features and functions that are in demand in key vertical markets. These research and development initiatives, combined with the Company’s restructured and strengthened go-to-market capabilities, will support the Company’s objective of delivering on its long term growth and profitability objectives.

The Company expects total revenue of $92.0 million to $94.6 million, representing 7% to 10% annual DDS segment revenue growth. Revenue is expected to grow at an accelerating rate as we move through the year, driven by increasing new customer acquisition and continuing sales productivity improvements.

The Company expects Adjusted EBITDA margins of 5% to 8%, reflecting relatively stable spending across most departments and increased investment in its research and development capacity.

Investment in research and development will accelerate product innovation, as well as the migration of all product offerings to Absolute’s next-generation service platform. This will facilitate greater scalability and operating efficiency, support the rapid deployment of new services across Absolute’s customer base and liberate resources currently required to support two platforms.

The Company expects cash from operations, prior to payments for income taxes and restructuring charges, as a percentage of revenue to be 8% to 12%, reflecting a double-digit year-over-year increase in Billings. Capital expenditures are expected to be between $3.9 million and $4.4 million, with the spending largely related to upgrades and expansion of the Company’s hosted data centres, office expansion and ongoing hardware refresh cycles.

On July 20, 2016, Absolute declared a quarterly dividend of CAD$0.08 per share on the Company’s common shares. The dividend is payable in cash on August 26, 2016 to shareholders of record at the close of business on August 5, 2016.

Management’s discussion and analysis (“MD&A”) and consolidated financial statements and the notes thereto for the year ended June 30, 2016 can be obtained today from Absolute’s corporate website at www.absolute.com. The documents will also be available at www.sedar.com.

A live audio webcast of the conference call will be available at www.absolute.com and http://bit.ly/2aHScxI. Please connect at least 15 minutes prior to the conference call to ensure adequate time for any software download that may be required to join the webcast. An archived replay of the webcast will be available on the Company’s website for 90 days.

Throughout this press release, we refer to a number of measures which we believe are meaningful in the assessment of the Company’s performance. All these metrics are non-standard measures under International Financial Reporting Standards (“IFRS”), and are unlikely to be comparable to similarly titled measures reported by other companies. Readers are cautioned that the disclosure of these items is meant to add to, and not replace, the discussion of financial results or cash flows from operations as determined in accordance with IFRS. For a discussion of the purpose of these non-IFRS measures, please refer to the Company’s Fiscal F2016 MD&A on SEDAR at www.SEDAR.com. 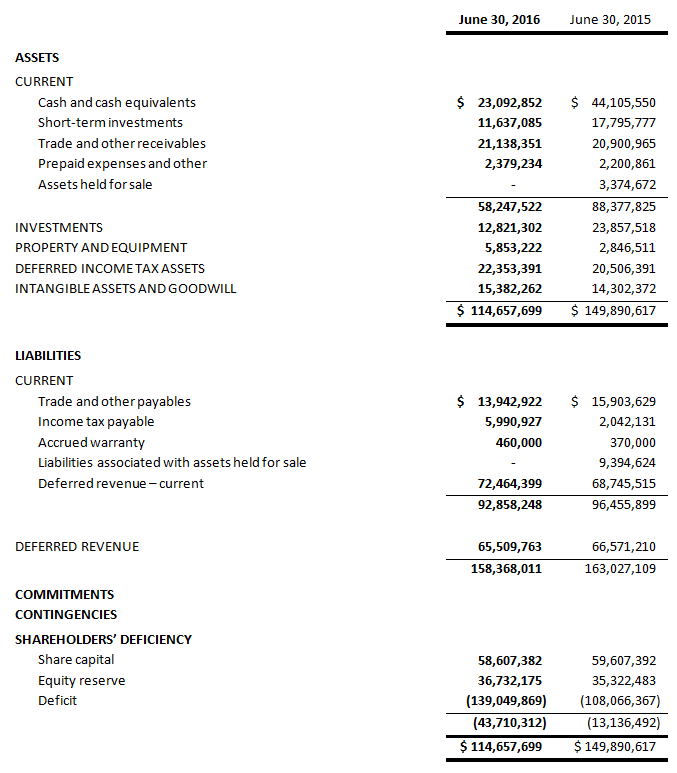 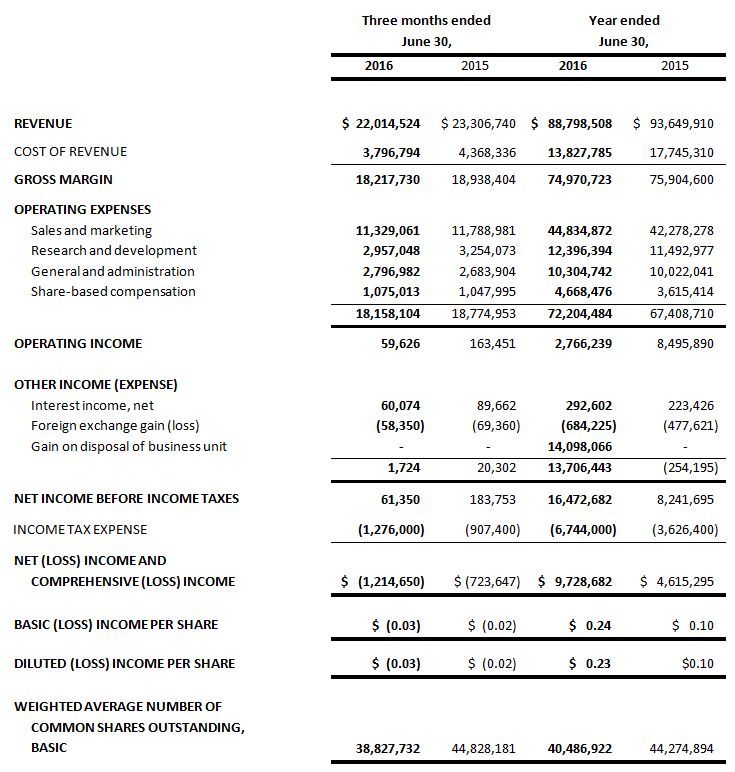 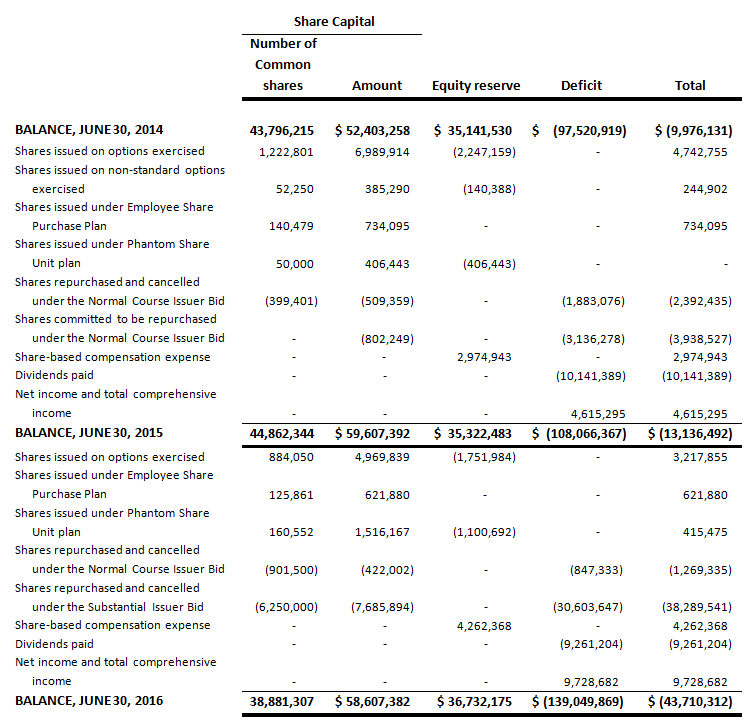 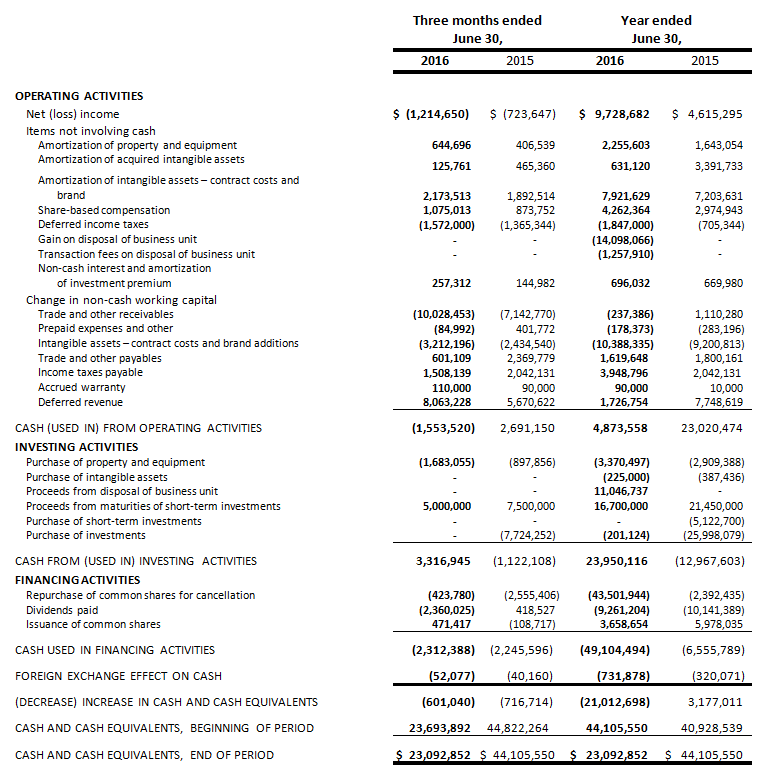