Vancouver, Canada: August 18, 2011 – Absolute® Software Corporation (“Absolute” or the “Company”) (TSX: ABT), the leading provider of firmware-based endpoint security and management solutions that reduce IT costs, prove regulatory compliance, respond to computer theft, and optimize productivity, today announced its financial results for the three month period and year ended June 30, 2011. All figures are in Canadian dollars unless otherwise stated.

“In fiscal 2011 we significantly grew sales contracts and nearly doubled our cash from operations by capitalizing on the leverage available in our business model,” said John Livingston, Chairman and CEO of Absolute. “We saw robust global sales for Computrace, and we continued to gain momentum for Absolute Manage, with an exceptionally strong fourth quarter. In addition, we further expanded our product offering and partner relationships to target opportunities in the emerging Mobile Device Management and Self Encrypting Drive markets.”

Mr. Livingston continued: “Heading into fiscal 2012, we remain committed to driving top line growth while carefully managing our expenses. We plan to continue to expand the business by growing our core anti-theft offering, diversifying revenue by accelerating growth in our non-theft recovery product lines, maximizing existing customer and channel relationships and expanding our distribution network.”

Consistent with prior years, 80-85% of Absolute’s commercial sales are from existing customers, as the Company maintains a high customer retention rate and continues to expand its footprint within its existing customer base.  During F2011, Absolute also continued to add new customers, which the Company expects will generate continued growth as Absolute further develops its relationships with these new customers.

In F2012, Absolute expects to grow Sales Contracts and Cash from Operating Activities above F2011 levels.

Management’s discussion and analysis (“MD&A”), consolidated financial statements and notes thereto for F2011 can be obtained today from Absolute’s corporate website at www.absolute.com. The documents will also be available at www.sedar.com.

Throughout this press release, we refer to a number of measures which we believe are meaningful in the assessment of the Company’s performance. All these metrics are non-standard measures under Canadian Generally Accepted Accounting Principles (“GAAP”), and are unlikely to be comparable to similarly titled measures reported by other companies. Readers are cautioned that the disclosure of these items is meant to add to, and not replace, the discussion of financial results or cash flows from operations as determined in accordance with Canadian GAAP.  For a discussion of the purpose of these non-GAAP measures, please refer to the Company’s Fiscal 2011 MD&A on SEDAR at www.SEDAR.com

See the “Subscription Business Model” section of the MD&A for a detailed discussion of why we believe Sales Contracts (also known as “bookings”) provide a meaningful performance metric.  Sales Contracts are a component of deferred revenue (see Note 10 of the Notes to the Consolidated Financial Statements), and result from invoiced sales of our products and services.

Approximately 95% of our Sales Contracts are denominated in U.S. dollars, and we believe this is important to consider when evaluating underlying sales performance. Sales Contracts in “constant currency” refers to the Canadian dollar sales that would have been reported had the average U.S. dollar foreign exchange rate been unchanged from the rate in the comparable period(s) of F2010, and is calculated by applying the appropriate U.S. dollar foreign exchange rate from the comparable period to the current period sales denominated in U.S. dollars.

3) Basic and diluted Cash from Operating Activities per share

A number of significant non-cash expenses are reported in our Cost of Revenue and Operating Expenses.  Management believes that analyzing these expenses exclusive of these non-cash items provides a useful measure of the cash invested in the operations of its business.  The non-cash items excluded in the determination of Adjusted Operating Expenses are stock-based compensation and amortization of acquired intangible assets. For a description of the reasons these items are adjusted, please refer to the Fiscal 2011 MD&A. 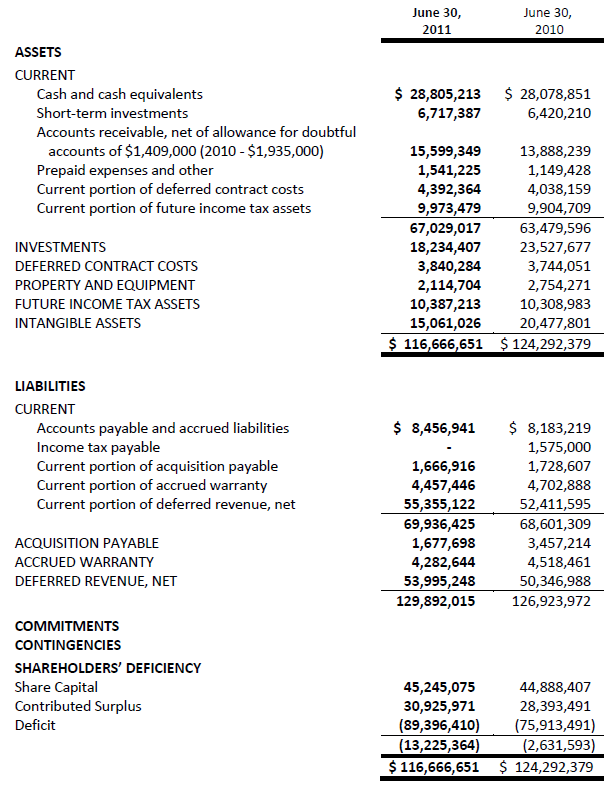 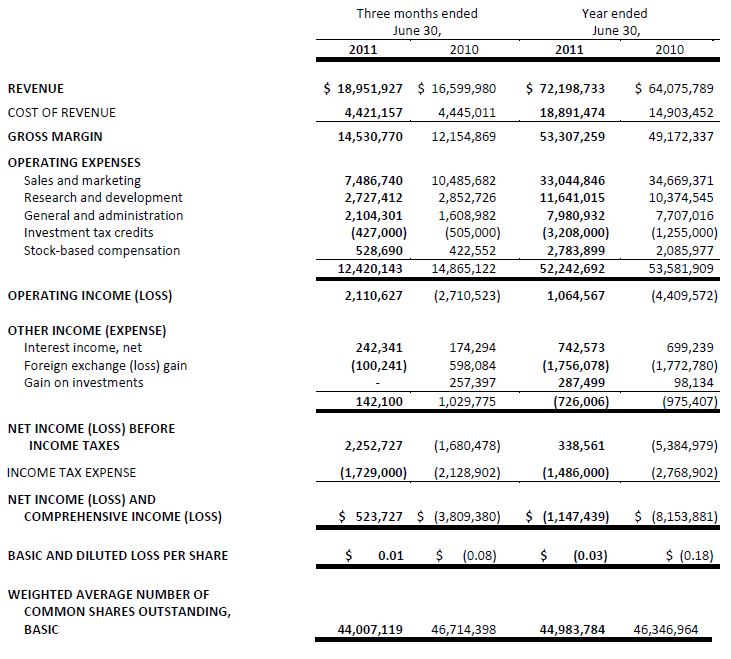 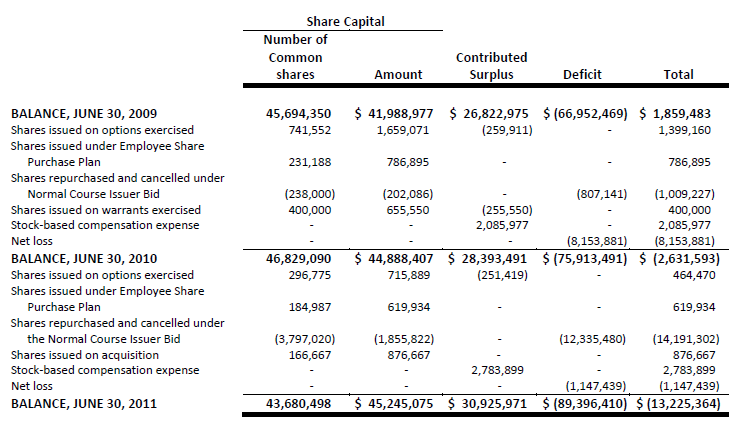 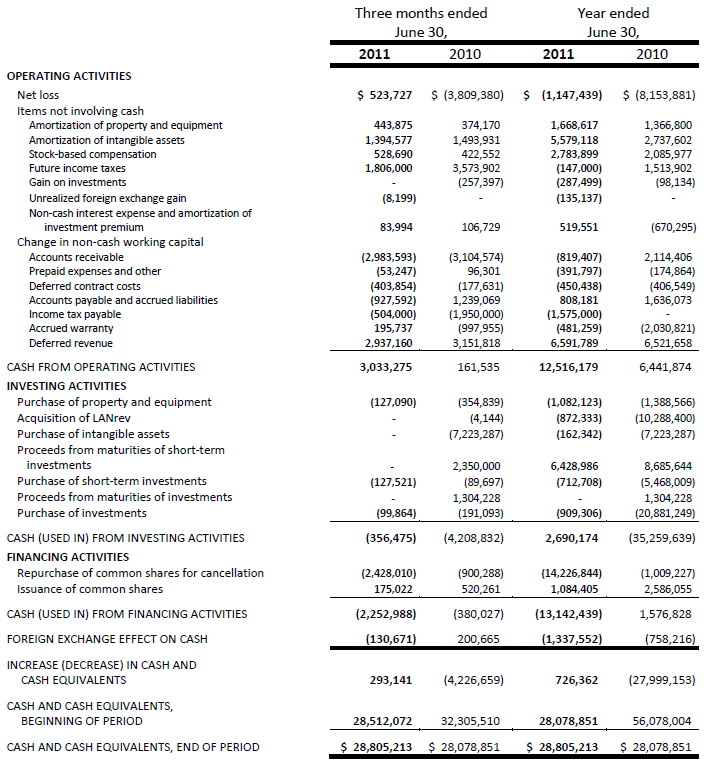