“Q2 sales contracts were down 3% in Canadian dollars, but were up 12% in constant currency over last year despite the continued weakness in commercial market spending,” said John Livingston, Chairman and CEO. “We believe this performance reflects our stated investment strategy. With a large commercial customer base, new and expanded programs with our partners, an established worldwide presence, and our acquired Absolute Manage product, we are well positioned to accelerate our sales growth. As we head into the second half of fiscal 2010, while we believe favorable market trends are now beginning from renewed PC refresh cycles, Windows® 7 purchases, and increased stimulus spending, the timing and impact is uncertain. In addition, the continued devaluation of the U.S. dollar has led us to adjust our guidance targets for the year based on a U.S. dollar exchange rate of $1.05, versus a rate of $1.10 used at the beginning of the year. At this stage, we are more likely to be at the lower end of the adjusted ranges.”

Mr. Livingston continued: “One of the key strategic investments we made last quarter was the acquisition of the LANrev product. We are excited by the early signs of success of this offering. In the quarter, we generated overall sales that exceeded our expectations and that included sales into our existing customer base. We also expect to complete phase one of our integration plan in calendar Q1, which consists of rebranding the product as Absolute Manage as well as some product integration.”

Sale's Contracts for Q2-F2010 were $16.1 million compared to $16.5 million in Q2-F2009. A majority of Absolute’s sales are denominated in U.S. dollars and therefore, periodic fluctuations in the U.S./Canadian exchange rate can impact reported Sales Contract levels. In constant currency, Sales Contracts increased 12% in Q2-F2010 compared to the same period last year. The increase from the prior period in constant dollar terms is primarily due to growth in the commercial segment and expansion of the Company’s international presence.

“We are encouraged by our performance to date,” said Rob Chase, CFO at Absolute, “as our key sales ratios have begun to turn positive. In particular, our expiring commercial subscription renewal ratio has trended up to 1.7x from a low in Q4-F2009. This is a positive sign for next year’s sales growth as we currently have 902,000 subscriptions expiring in fiscal 2011, a 36% increase over fiscal 2010.”

Absolute deploys its services through a software-as-a-service (“SaaS”) model. A feature of the SaaS model is its ability to generate operating cash flows. Absolute’s cash from Operating Activities for Q2-F2010 totaled $1.6 million compared to $3.1 million in Q2- F2009. The reduction reflects management’s investment strategy and the weakened U.S. dollar, which has resulted in a foreign exchange loss of $1.9 million. Cash from Operating Activities on a diluted share basis was $0.03 in Q2-F2010, compared to $0.06 in Q2-F2009. Revenue for Q2-F2010 was $15.8 million, an increase of 21% from $13.1 million in Q2- F2009. Revenue is typically a lagging performance indicator as it is a function of deferred revenue as opposed to sales in the quarter. The majority of the revenue from Q2-F2010 Sales Contracts is included in deferred revenue on the balance sheet at December 31, 2009, which increased to $100.5 million from $99.6 million September 30, 2009, and compared to $95.9 million at June 30, 2009.

Absolute is in a strong financial position, with no debt and the financial resources necessary to fund its operating and capital requirements and to execute on its growth strategies. At December 31, 2009, Absolute’s cash, cash equivalents, short-term investments and investments were $65.0 million, compared to $73.9 million at September 30, 2009. The reduction in cash position is due to the use of $10.3 million in the purchase of LANrev.

Absolute Software will hold a conference call to discuss the contents of this release on Monday, February 1, 2010 at 2:00 p.m. PT (5:00 p.m. ET). All interested parties can join the call by dialing 647-427-7450 or 1-888-231-8191. Please dial-in 15 minutes prior to the call to secure a line. The conference call will be archived for replay until Monday, February 8, 2010 at midnight. To access the archived conference call, please dial 416-849-0833 or 1- 800-642-1687 and enter the reservation code 49682867 followed by number sign. A live audio webcast of the conference call will be available at www.absolute.com and www.newswire.ca. Please connect at least 15 minutes prior to the conference call to ensure adequate time for any software download that may be required to join the webcast. An archived replay of the webcast will be available for 365 days at www.newswire.ca.

1.a Absolute refers to “Sales Contracts” (invoiced sales) as a revenue measure, “Cash from Operating Activities” as a profitability measure, and “Basic and Diluted Operating Cash per Share” (Cash from Operating Activities divided by the average shares outstanding for the period; diluted calculated using the treasury stock method) as an earnings per share measure. With the exception of Cash from Operating Activities, these are non-standard measures under Canadian Generally Accepted Accounting Principals. Absolute considers these measures to be key performance metrics as substantially all Sales Contracts in each quarter are deferred on the balance sheet, while the related costs are expensed in that same quarter. Refer to the Business Model section in our Management Discussion and Analysis for more details.

1.b Sales Contracts in constant currency refers to the Canadian dollar sales that would have been reported had the U.S. dollar exchange rate been unchanged from the rate in the prior year. With approximately 95% of Sales Contracts in U.S. dollars management believes this to be a more meaningful evaluation of the underlying performance of the business. 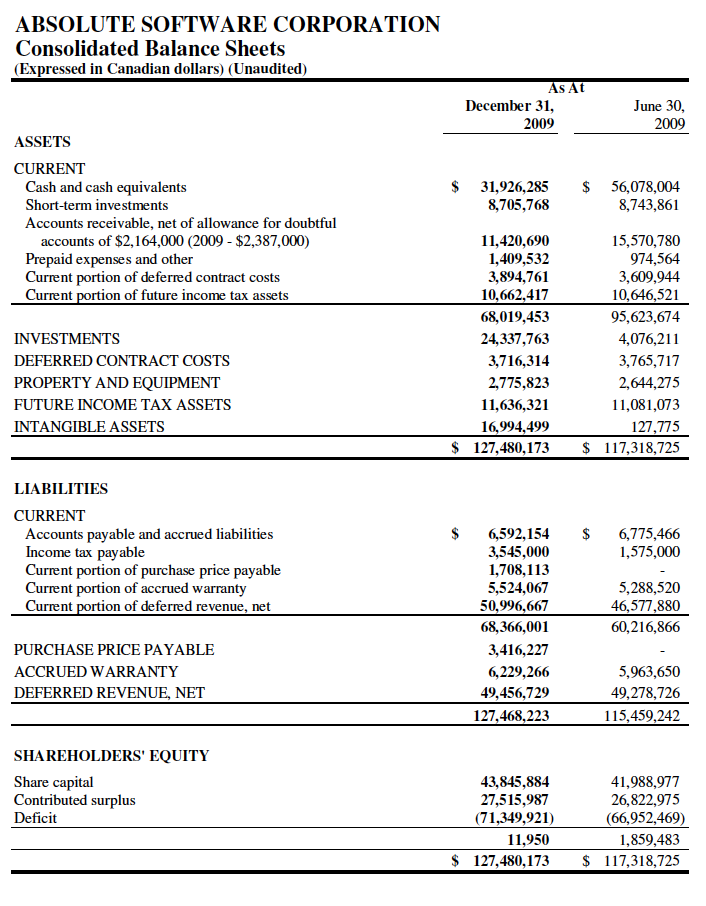 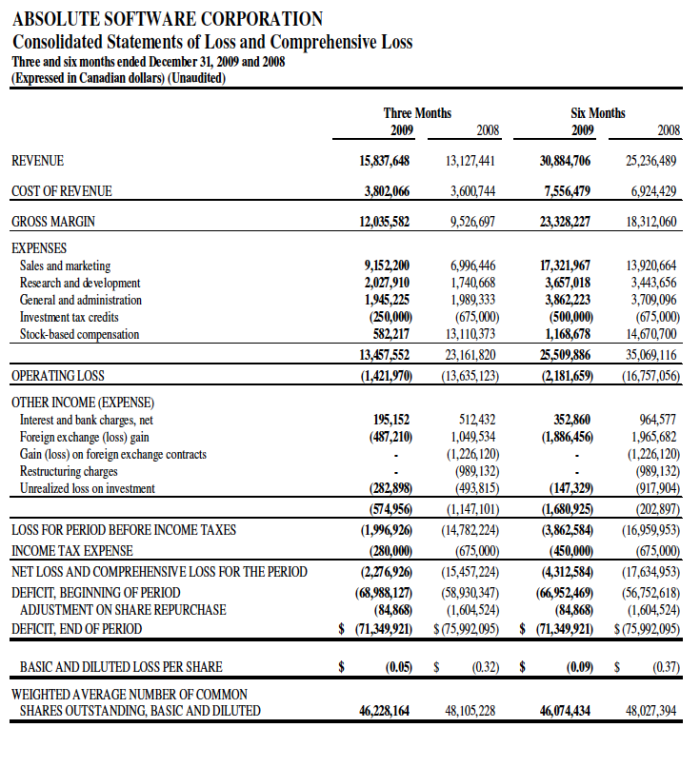 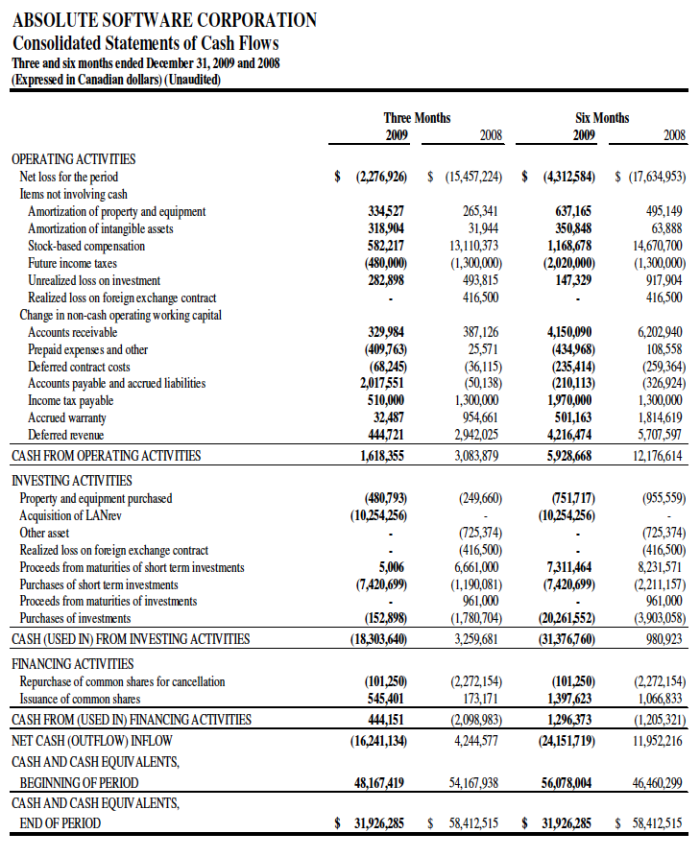