“Results for the quarter were within the range of our expectations and despite the continued economic and currency headwinds we believe that we are on track to meet our fiscal 2010 guidance,” said John Livingston, Chairman and CEO of Absolute. “We continue to execute on promising new initiatives, and believe that innovative OEM programs, including those with HP, Lenovo and Intel, will help us in our drive to increase attach rates with our key PC OEM partners. On the international front, we are expanding our footprint, and we anticipate that Intel’s roll out of its new anti-theft products, and a pick-up in the refresh cycle prompted by Windows 7, will help drive future growth.”

Sales Contracts for Q1-F2010 were $19.2 million compared to $18.2 million in Q1-F2009. A majority of Absolute’s sales are denominated in U.S. dollars and therefore, periodic fluctuations in the US/Canadian exchange rate can impact reported Sales Contract levels. In constant currency, Sales Contracts increased 1% in Q1-F2010 compared to the same period last year. The increase from the prior period in constant dollar terms is primarily due to strength in the commercial segment and growth in the international business.

Commercial sales were up 8% year-over-year in constant currency due primarily to strength in the education, government and healthcare markets, and offset in part by slower activity in the corporate market. Commercial sales to existing customers continued to show strength, generating sales of $14.2 million for the quarter, up 23% (16% in constant dollars) compared to $11.5 million in Q1-F2009.

“Global computer shipments are expected to grow 50% in the next four years meaning our addressable market opportunity is significant and growing; every computer sold worldwide is a potential customer,” said Rob Chase, CFO of Absolute. “In this context, reinvestment in our products, our partners and our personnel is the right plan; it puts us on the right strategic path to capitalize on the strengths of our core business and leverage our momentum as we grow our business on an international scale.”

Absolute is in a strong financial position, with no debt and the financial resources necessary to fund its operating and capital requirements and to execute on its growth strategies. At September 30, 2009, Absolute’s cash, cash equivalents, short-term investments and investments were $73.9 million, compared to $68.9 million at June 30, 2009.

It is important to note that these targets were set assuming a U.S. dollar exchange rate of $1.10.

Management’s discussion and analysis (MD&A), consolidated financial statements and notes thereto for the first quarter can be obtained today from Absolute’s corporate website at www.absolute.com. The documents will also be available at www.sedar.com.

Absolute Software will hold a conference call to discuss the contents of this release on Monday November 2, 2009 at 2.00 p.m. PT (5:00 p.m. ET). All interested parties can join the call by dialing 416-644-3422 or 1-800-731-5319. Please dial-in 15 minutes prior to the call to secure a line. The conference call will be archived for replay until Monday November 9, 2009 at midnight. To access the archived conference call, please dial 416-640-1917 or 1- 877-289-8525 and enter the reservation code 4169805 followed by number sign. A live audio Webcast of the conference call will be available at www.absolute.com and www.newswire.ca. Please connect at least 15 minutes prior to the conference call to ensure adequate time for any software download that may be required to join the Webcast. An archived replay of the Webcast will be available for 365 days at www.newswire.ca.

1.a Absolute refers to “Sales Contracts” (invoiced sales) as a revenue measure, “Cash from Operating Activities” as a profitability measure, and “Basic and Diluted Operating Cash per Share” (Cash from Operating Activities divided by the average shares outstanding for the period; diluted calculated using the treasury stock method) as an earnings per share measure. With the exception of Cash from Operating Activities, these are non-standard measures under Canadian Generally Accepted Accounting Principals. Absolute considers these measures to be key performance metrics as substantially all Sales Contracts in each quarter are deferred on the balance sheet, while the related costs are expensed in that same quarter. Refer to the Business Model section in our Management Discussion and Analysis for more details.

1.b Sales Contracts in constant currency refers to the Canadian dollar sales that would have been reported had the U.S. dollar exchange rate been unchanged from the rate in the prior year. With approximately 95% of Sales Contracts in U.S. dollars management believes this to be a more meaningful evaluation of the underlying performance of the business. 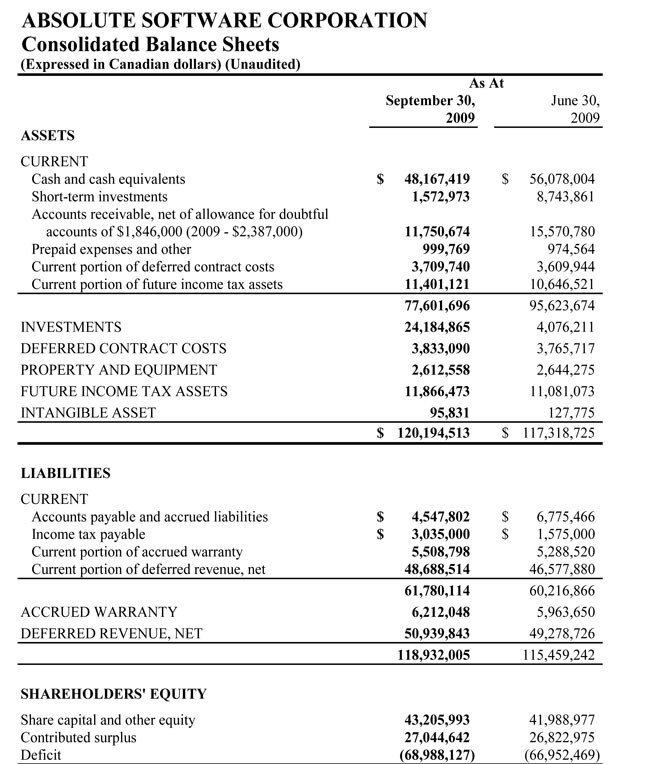 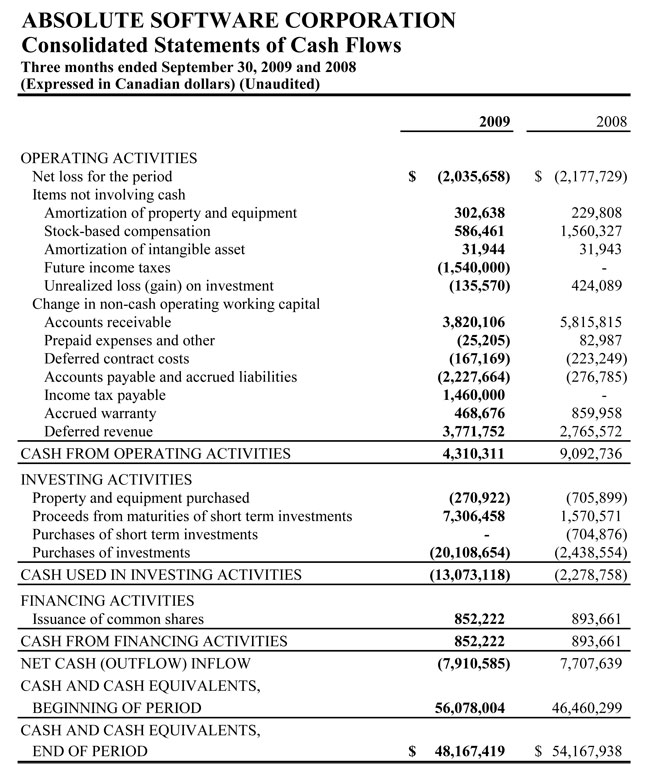 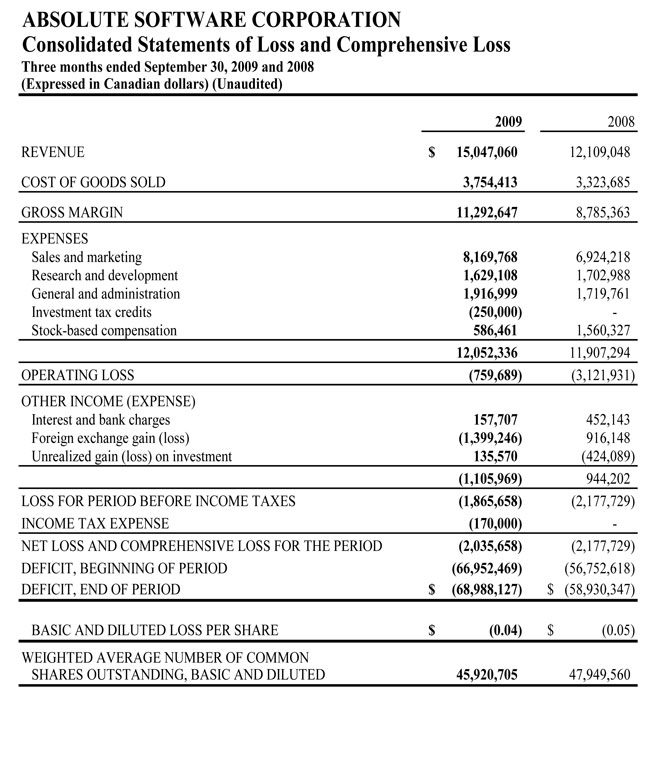