The Ponemon Institute and IBM recently released the 2014 Cost of Data Breach study, showing that the cost of data breaches continues to rise, up to $145 per lost record over the $136 from 2013. The average cost to a company was $3.5 million, 15% higher than the 2013 cost. 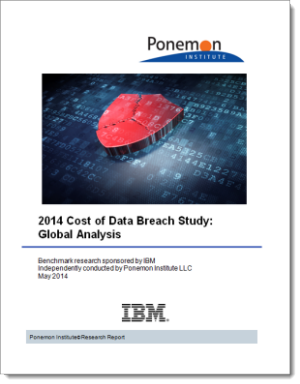 This is the 9th year of this report, analyzing actual data breach experiences from more than 250 organizations from 11 countries. The cost measurements discussed in the report include direct, indirect and opportunity costs associated with the breach, showing that the loss of customers does the greatest damage to the bottom line. Repairing brand image and acquisition of replacement customers often does not factor into organizational preparedness for data breaches.

As the Ponemon release notes, "Companies are finding that data breaches have become as common as a cold but far more expensive to treat."

Key highlights from the study:

The report indicates that an incident response and crisis management plan and having a CISO can help prevent data breaches, while having a co-ordinated response to the breach, business continuity management and containment of the damage can greatly reduce the cost of data breaches, by as much as $14 per record. Many organizations surveyed wanted to see the organization security strategy double in order to strengthen security against the growing number of threats.

As part of increasing your security posture to prevent data breaches, and help detect them if they do occur, it’s important to secure organizational endpoints. Endpoints such as laptops, smartphones and tablets not only contain sensitive corporate information that could lead to a breach, they also present a risk for compromising access to corporate networks. For more on securing your endpoints, check out Absolute Computrace and read up on our advice on data security.